After dinner we discovered the dorms. There was three dorms to accommodate up to 36 girls. The dorm of Jenny and Louise had only 10 girls, it meant two beds for us ! They were old fashion dorms with the beds separated by a night stand and a cupboard. All the beds faced tall windows with dark curtains, and each dorm had its own loos, communal showers, wash basins, and tall mirrors.
All our roommates undressed and we discovered a few decorated bums and thighs. Jenny, the Head Girl advised, "You best join us for a shower, you don't want to reek if inspected !" We weren't too shy, we had been boarders for years. We had met as fifth formers. There wasn't much differences between the girls and us, we are all about the same age.
They gave us night dresses and they gathered on the beds around us. "Come on ! Tell us how you have been fighting the boys off with those mini shorts !"
"Well... a few will whistle or cheer, but most of them will take discreet peeks. Boys are actually very shy...."
"So you aren't actually fighting them off !"
"Wait !"
"Even the boys who whistle or cheer are shy... Very few of them will invite you for a drink and they are usually quite clumsy when you accept..."
"Sigh... That's depressing !"
Betty repeated, "Wait !"
"The more adventurous boys are among your friends. They get itchy hands..."
One of the girls enthused, "And when they are wearing nut-huggers you can see how interested they are !"
Another one laughed, "Antonia ! You sure have a itch and it isn't about your hands !"
Alicia continued, "They aren't as shy as they already know you, they will invite you for a drink. Boys love talking about themselves, if you listen and smile and giggle when required you might be invited for dinner. Giggling is even more important than smiling !"
Betty added, "Short shorts are a great boy magnet, but once you've caught a live one, a miniskirt and a flash of your knickers will have him swallow the hook, the sinker, and the line..."
Alicia teased, "Then a walk in a park and you will have hands with plenty of fingers exploring your curves..."
Then the lights were turned off, and naughty girls dreamed of boys with adventurous hands...
Alicia and Betty whispered for each others,
"So far so good !"
"I feel as if having turned the clock back !"
Then we were awaken by a sister having caught a naughtier girl reading a novel under her covers with a torch light. The nun read aloud the title of the novel, "Red, Wild and Deep!" We thought that one needs three hands to read such a novel with a torch light... The nun lead her by an ear to the end of her bed, pulled her nighty up, unbuckled her belt, "You are getting eight because of your two demerits." All the girls had first buried themselves under the covers, but after the second resounding "Smack!" they peeked above their bed sheet. We also didn't miss a crumb ! 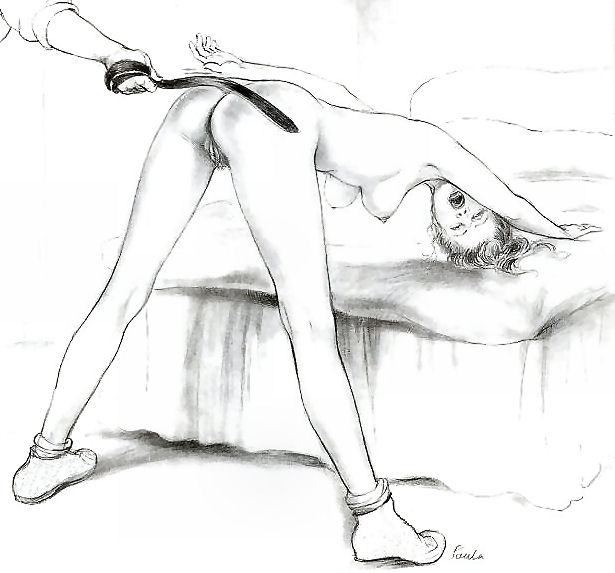 The nun left the girl on her bed rubbing her well reddened nates. Two girls rubbed her bum with a balm and she purred. They teased her, "You're enjoying that too much !"
Betty giggled, "Fire in the hole !"
Alicia laughed, "You're a brazen imp ! You deserve to be belted !"
We eventually slept. We were awaken by a mean bell. A nun entered the dorm, pulled open the curtains, "The last two to be up will get two dems !"
We didn't get it that dems are demerits, and we were the last two out of bed. The nun pointed a menacing finger, "You two, you got 2 dems ! You are new, what's your names ?"
"Huh... Alicia... Sister..."
"Ah... Betty... Sister..."
"Three dems each, huh and ah are not ladylike !"
Alicia teased, "Six plus three that's nine, that should roast your bum real nice !"
Betty replied, "Reminding you that your butt could also be well toasted !"
We again tested our phones and there was still no signal. Another bell rang and our roomies announced, "Morning run !" Short shorts, sports bra and an assortment of trainers flew our way. "Hurry up ! You don't want to be late with Sister Rambo !" 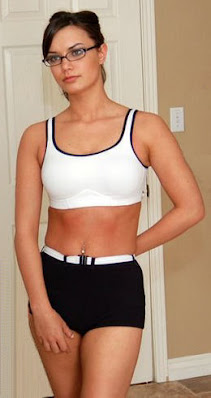 "Phew!" We made it without collecting more dems. It wasn't too warm on the moors and our shorts were quite skimpy. We ran to keep warm and we actually enjoyed the exercise. We had said that we would be jogging every mornings during our hols.
Back to the convent it was warm showers and our naughty girl from last night got another rub with after spanking cream. We dressed. Jenny and Louise inspected us, "Before breakfast there's uniform inspection and you don't want to be told to drop your knickers !"
We all lined up facing a Sister who pointed the two of us, "Two steps forward and lift your skirts front and back !" We were obviously the newbies who had to be tamed. We obeyed with a blush and displayed our white cotton knickers. "Two steps back and you are all cleared for breakfast."
We enjoyed a great breakie, and Jenny the Head Girl challenged us, "You're game for classes ?" Alicia raised her hand and Betty gave her high five !
Alicia and Betty
To be continued...