The name is Erika, 22, newlywed with Eric, 24, a first name match, amazing ! We had a great honey moon in Scotland, Eric had worn a kilt, with navy shorts. I had also worn a kilt, a short one, with white knickers.

Then we bought a house in Forest Hill, a small village by a forest and atop a hill, obviously ! It wasn't one of those new paper-mâché houses. Its a sturdy stone house with a big garden on the edge of the village.

Monday to Friday Eric takes the train from the nearby market town to Birmingham, his office is next door to the station. I also work, part time as a secretary for the local nurse, and take care of our house and its garden.

Since Eric takes the car to the station, I bought a bike and my long legs get plenty of exercise as the supermarket is 5 miles away. The village with its single lane uphill road branching from a very narrow bridge has remained into a time warp with only an old co-op and very few shops.

I work either mornings or afternoons, as the nurse needs me. She is a stern middle aged lady, "Women your age should wear short skirts, not too shorts tho, an inch above the knees..." She didn't have to repeat herself. There isn't too many jobs in the village. She is married to the reverend, a tall bony man looking as a scarecrow.

There's a few more scary middle aged couples, always dressed in black or dark blue. The one of the jelly-belly mayor and his matronly church lady. The burly constable with his grey haired wife who looks like a prison warden. The chief municipal caretaker and the thin downtrodden woman who looks like she wouldn't say boo to a goose. They are the law of the land, and the village is picture perfect...

Most of the men work in Birmingham or Nottingham. The children are picked up by a school bus from the nearby market town. The women are homemakers with the exception of the younger ones, who unmarried or without children, work in the few shops.

Until the nurse, my employer, mentioned that young women should wear skirts I hadn't noticed that most of the women my age wear above the knees dresses or skirts. Eric as probably all the men of the village didn't object. He also has fun pulling up my skirt up...

Then we had a surprise. Saturday morning we overheard Johnathan, our neighbor shouting, "I told you to mow the lawn on Monday and reminded you on Thursday, why haven't you done it ?"

Sophia his wife meekly replied, "I am sorry Hon, the tractor wouldn't start and I forgot to call the mechanic..."

"I am going to give you a spanking, a well deserved spanking !"

Out of curiosity Eric walked around our house to have a better view of their terrace, and I followed with a blush.

He grabbed her by the belt of her jeans miniskirt, unbuckled it and pushed her skirt down her slender legs till it fell on the ground. She started blushing. Then he peeled her knickers down to her knees and pulled her over his lap. She blushed the more. He also gently brought one of her arms behind her back. Then he spanked her. It wasn't a naughty schoolgirl's spanking, it was a long and severe spanking.

Eric with a teasing smiled said, "Lets pay them a visit !"

I objected, "Maybe we should wait a few minutes..."

He took my hand, and I had to follow him.

A minute later I was blushing as red as Sophia. 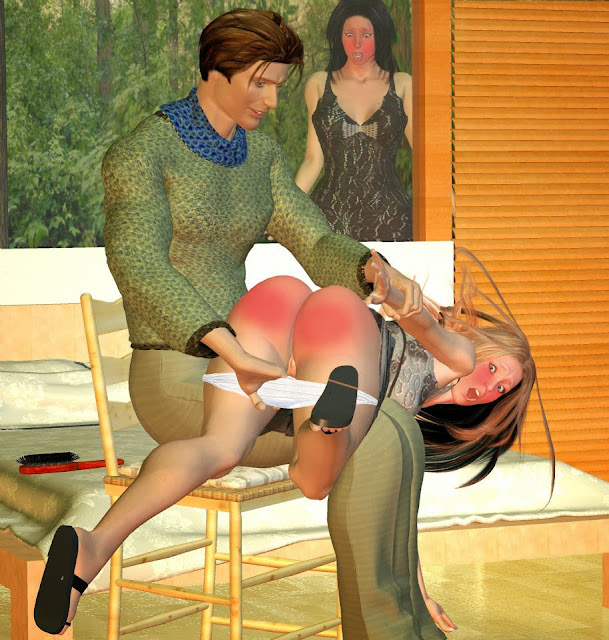 She had kicked her knickers off, and was pedaling her legs and showing everything. Johnathan acknowledged us, "Almost done !" He was counting aloud, "94, 95, 96, 97, 98, 99, 100 !" I understood that she was to receive one hundred smacks. He helped her stand with her crimson butt facing us. "Pick up your knickers and skirt, and get us a couple of beers."

She turned around and we saw that she was red face with moist eyes. I was frozen. Eric told me, "Why don't you help her..." I hurriedly picked up her skirt while she picked up her knickers, and followed her to the kitchen. She was rubbing her fiery derriere.

She opened the fridge, grabbed a can of Pepsi and rubbed her glowing bum with it, "Please take two Heineken and bring them to the guys..."

I did and returned. She was pulling up her knickers. "That was quite a spanking ! You're ok ?"

She had said that without any acrimony or resentment, as if a fact of life. "What did you do, or didn't do ?"

"I haven't mowed the lawn as I was told. The tractor wouldn't start, and I forgot to call the mechanic..."

"You should have called, I would have offered ours..."

From the terrace we heard Joshua, "Honey! They are staying for lunch. I am firing up the barbie..."

Later between two prawns Johnathan with a faked innocent grin teased, "Erika, tell us, has Eric ever spanked your lovely bum ?"

Eric with a wide smile, "Dearest tell them of your last spanking..."

I was cornered, and with a deep blush I confessed, "I was spanked three days ago for having messed up our dinner..."

Eric added, "Erika isn't the best cook this side of the Pecos."

Jonathan winked for Eric and further teased, "Did Eric take your knickers down?"

Sophia had an amused smile, and I blushed the more...

I had again stammered and Eric raised his voice, "Erika !"

They were both determined to having me blush crimson and Eric again commanded, "Erika !"

NB : This story is dedicated to Phil...