Saturday morning I was wide awake before my radio alarm clock. It told me that it was 6 AM. I realized that I wouldn't be sleeping another Z. I got out of bed and prepared a toast with slices of French goat cheese. I mused, Imagine France, that goat cheese will be cheaper, and you will have an expat allowance.

I had decided last night. I was going to visit the Ecole Ecarlate. I of course, knew that écarlate means scarlet. What a strange name for a school. I also wondered about that promise of guarantied results. I further mused, What about the méthode traditionnelle, and the school uniform? The little wheels between my ears teased. It adds up, you will be spanked till you are fluent!

I shrugged. I am not afraid of a spanking. Daddy spanked me till I got my O and A Levels, and continued till I graduated from my banking school.

With a second cup of coffee, I searched on my cellphone for that Birchwood Manor at Switchingham Village. Once I had found it I tried 3D, but I got a "Private Property" message. TomTom said that it wouldn't be more than a twenty minutes bike ride.

After a long shower and having dried my hair, I pulled up my new white cotton knickers. I also selected a very conservative matching bra. The Victoriana white blouse and the shortish tartan pleated skirt followed with the black sweater. Next were the knee-high socks and I selected a pair of black brogues. In my tall mirror, I smiled for having traveled back in time. 'Back to school naughty girl!' To be safe with the cloudy weather, I added a lightweight hooded raincoat.

It was a leisurely ride, and before the village, I took the long private alley leading to Birchwood Manor. I discovered a lovely old stone house with a superb English garden. 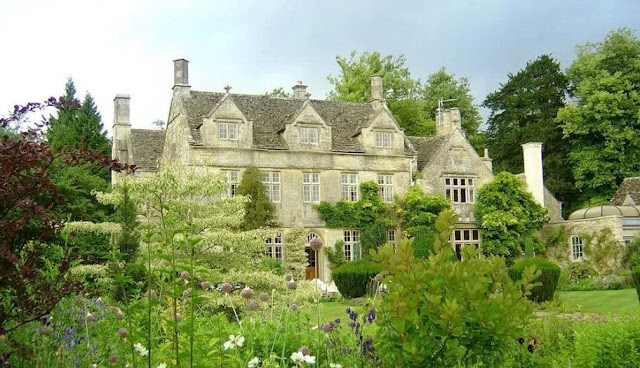 I parked my bike and gently tap-tapped the door with the old brass knocker. A middle-aged gentleman with an impressive mustache and an elegant tweed suit opened.

"Good morning Sir, it is about the French lessons."

"Indeed! Compliments for the uniform. I am Monsieur Maurice.”

He led me into a small office with two comfy chairs in front of an old wooden desk. I immediately noticed the magazine on his desk. Its name of Janus meant nothing for me, but the picture on the cover confirmed what I had imagined about the méthode traditionelle. 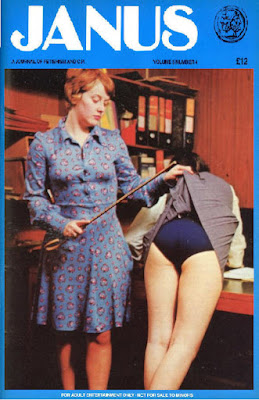 "We shall begin with a test. We have to assess your level to decide if you have the basics for turning you into a fluent French speaker." He showed me an antic school desk with an attached seat.

The test took one hour, it was written and oral. With that cover of Janus in mind, I did my best, but he grimaced for my accent. While he corrected the written part, I prayed that he wouldn't reject me. 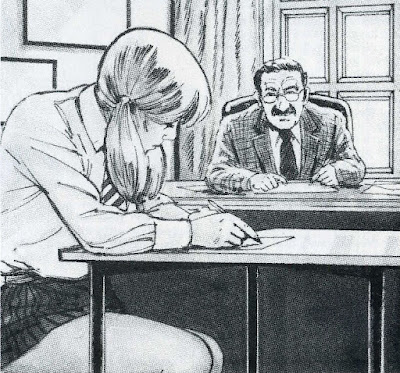 Finally he gave his verdict, "C minus, a barely average grade."

I blushed, "I am sorry Sir. Does it mean that I don't have the minimum requirement?"

"Hahaha! Why is it that important to be French fluent?"

"Its about a promotion and a great position with our agency in Calais."

"It will take 3 months, alternating 3 weeks with us including weekends, and one week back at your bank."

"How many years of French have you had?"

"Such a poor grade after seven years of French. You should be ashamed of yourself."

I lost my smile.

"It is evidence that you were lazy. You deserve to be punished."

"As a lazy girl you will be severely spanked on your bare bottom."

I couldn't say that I was surprised when he stood and pulled me over his knees. It was nonetheless quite embarrassing to be pulled by the ear as a ten-year-old. 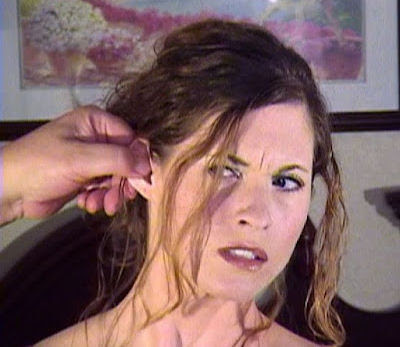 He swiftly raised my skirt. I expected that much, but he lowered my knickers. Daddy had never pulled down my knickers, he only pulled them up. I felt a hot flush and knew that I was blushing as red as a peony.

He spanked my bottom and thighs. I tried to keep my legs tightly closed. He had callous hands, probably from maintaining that lovely garden. He spanked hard and counted the smacks. After forty smacks, I started pedaling my legs and no longer cared what I was showing. He pinned one of my arms behind my back, and had one of his legs locking mine, and continued. 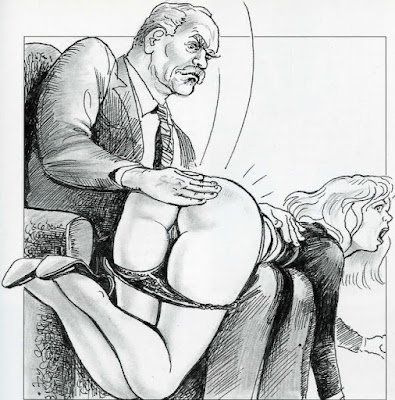 I got one hundred smacks. I had never received such a long and severe spanking. My bum and thighs were throbbing.

He helped me stand up and ordered, "Don't rub! Stand in that corner with your knickers still down and holding your skirt up." I was quite contrite. "Sniff!" I was indeed back in school and already spanked, well spanked.

While I was in the corner, he asked for my full name, age, address and more as he completed my file. "You will be boarding, sharing a room with 3 girls. The next term starts in a week. Your bank will have payed my fee by that time. There's no refund if you quit before the end of the term. If you quit, your bank will be made aware of that. You will return to Victoriana for a full kit."

"I promise that you will be fluent, as if you had a French mother. Pull your knickers up, adjust your skirt and give this invoice to your bank. You will notice that my methods aren't mentioned. You may, if you want, tell your colleagues that you will be spanked as a naughty schoolgirl till you are fluent." 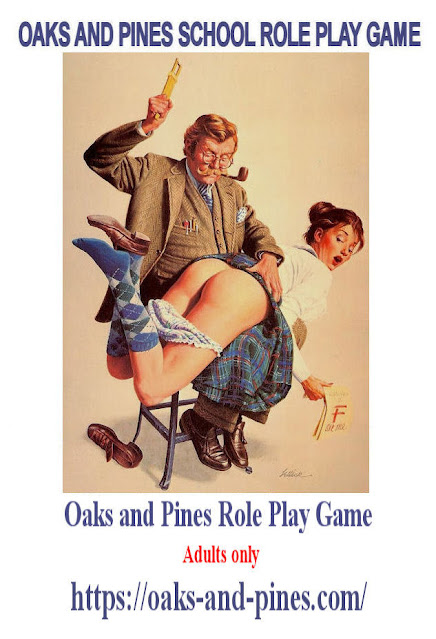 PS : The pic of the young lady being pulled by the ear is from Contemporary Life