A few months later, winter was around the corner and we were issued thicker kilted skirts. Amanda laughed, "Whoa! They are almost longer !"

Mr McTavish, our Principal, announced that we would be spending the weekend in Edinburgh to visit its castle and the Scottish National Gallery.

We enthusiastically rose earlier because of the drive. We were thoroughly inspected. We all had to raise our skirts to show that we are wearing white uniform knickers. Quite a few gathered flaming red hand prints, and had to re-polish their Mary-Jane shoes.

Breakfast was sandwiches onboard our coach. With a four hour drive time was precious. The small meandering Scottish roads didn't help. We sang all the silly songs we could think of,

"One hundred girls sitting on a fence...

She is a brunette !

We dozed off... We waited for the single onboard loo... We dozed off... We stopped at a rest stop and there's was a bus load of boy scouts. Juniata lead us into again singing, "One hundred girls sitting on a fence..."

She didn't go further, Miss PE had smacked her skirted derriere ! The boys laughed, and she blushed as she hurriedly retreated onboard our coach.

It was 10 AM when we parked in front the imposing Edinburgh castle.

After the threatening spikes of the portcullis, we started our visit from the high grounds with the spectacular views of Edinburgh from the different walls. Our history professor commented, and he was great as he explained the special relation between Scotland and France. We continued with St Margaret's chapel, and eventually entered the Royal Palace to discover the private apartments, the Stone of Destiny, and the Crown Jewels. When the one o'clock gun was fired. It was time for a snack of fish and chips...

Then we returned to the palace to continue our visit with the Great Hall, the Queen's collection of embroideries and the kitchen ! Our professor explained, "A girl needed a minimum of manners to be a chamber maid... and the lady of the manor's maid would know how to read and write... girls without education worked in the kitchen as scullery maids, washing pots and pans..."

There was a sign for "Caution wet floor !" and I had already stepped in soapy water. The floor with old polished stones was indeed quite slippery. While our profs weren't looking I felt silly and did a Holiday on Ice number. Sally also stepped in the water and joined me for a Rock Around The Clock dance while our friends kept watch.

Sally slipped but she didn't fall. I did as she had let go of my hand. I took down a few old copper pots and a pan with me. The noise was deafening ! Our faculty caught up with us. They weren't too happy.

Miss PE grabbed my ear as if I was ten, and pulled me behind the curtain with the sign reading "Adults only !" I discovered a drawing that didn't require a caption. 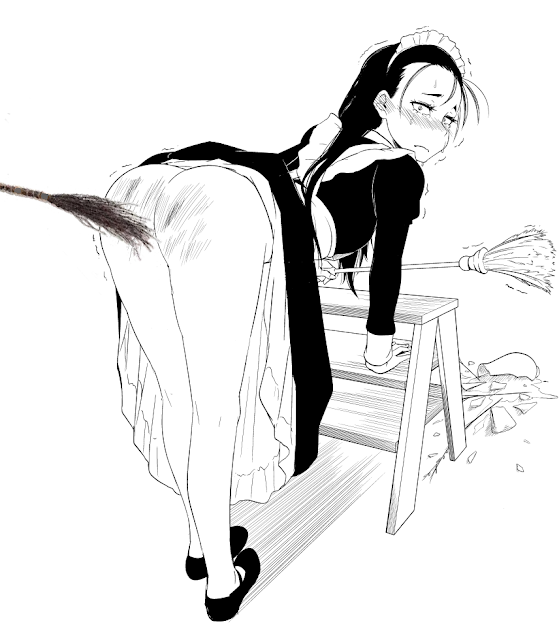 The small window less room offered an old trestle and some antic contraption that looked like two chairs set back to back. Miss passed sentence, "Misbehaving scullery maids were birched, and you are going to found out how it felt like !" 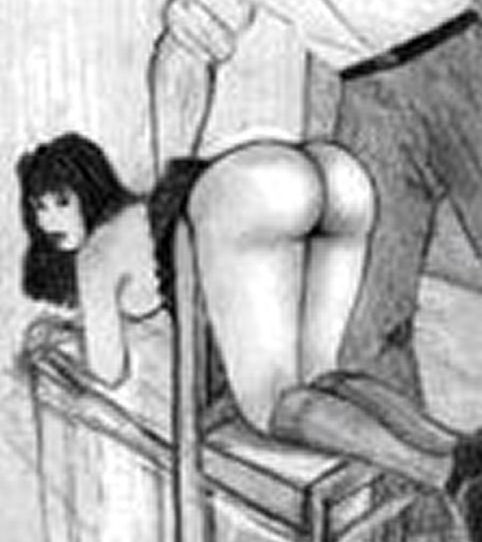 She picked a small birch from a nearby hook, pulled me down over those chairs, raised my skirt, pulled my knickers down to my knees and whipped me. I got ten strokes and I tried to keep quiet, but eventually bawled when she smacked my upper thighs,

I knew that visitors would hear me, but I couldn't help it.

Then she pushed me out of the kitchen's punishment room with my knickers still around my knees, and grabbed Sally by one of her braids. I hurriedly pulled up my knickers and rubbed. I was surprised that I wasn't worse for wear beside having a super fiery bum. Although I had received only ten strokes I had a very good idea of what it was like to be birched as a scullery maid !

Sally was as loud as me and a few visitors poked their heads into the kitchen's doorway. They saw me frantically rubbing, and there was no place to hide my shameful blush.

Moments later our party left the kitchen. Sally and I were red face and trying to be as discreet as possible when rubbing our skirts over our blazing derrieres. We also tried to refrain from rubbing when we came across more visitors, but they all seemed to have knowing grins. We understood that the whole castle had heard us, and we blushed the more. 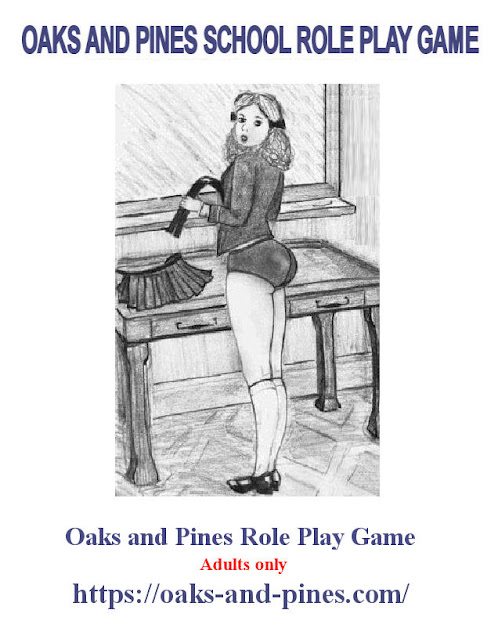