Monday morning meant being back at work. Mrs Forsythe asked about the marathon in Paris. I didn't tell her about the jambes en l'air party, but I had to admit my disappointing time. She said that twenty minutes over the targeted three hours was still quite a performance. I knew that six months ago I would never have dreamed of finishing it. I nonetheless felt that I had somewhat failed.

An hour later she surprised me, "I have been thinking... If you are so determined to succeed, you could do better than taking over from me when I retire."

"You could join the District Remedial School for Young Women. They have a subsidized work and study program. Half a day at work and half a day of schooling, they will prepare you for your A-levels and the law school entrance exam."

I couldn't avoid another silly, "Huh!?"

"After law school, you would join the legal department as a lawyer. That would be far better than being a secretary."

The little wheels between my ears were speeding.

"Mind you, that Remedial School has stingy methods to ensure success. If you are interested, I will talk to the boss."

The little wheels had slowed down. I had made up my mind, "Yes, please, and thank you Ma'am."

Two days later I was having lunch with Daniella, and told her that I am thinking of retaking my A-levels and attending law school.

"That's an ambitious program. It will require a lot of work. Will you will be able to keep up with your job?"

I told her about Mrs Forsythe's idea of signing for the work and study program with the District Remedial School. "She will be talking to the CEO. If he agrees, it will be half a day at work and half a day of schooling."

"The District Remedial School! You do know how they ensure success?"

"Yes, and that's how I learned to play great tennis, and almost ran a marathon in three hours."

"So did the Crimson Manor Discipline Academy."

"You only had to wear it every other day, and very few know of that discipline program, with the Remedial School you will have to wear its uniform six days a week. Everyone will know that you have been a lazy girl having to attend a Remedial School, and everyone knows how they deal with lazy girls!"

"Instead of being a secretary all my life, I will be a lawyer!"

"You're an ambitious girl!"

"Yes, and I will do whatever it takes!"

"I wish I had your courage. The Country Club's Discipline Academy was enough for me. I did learn how to play tennis and ran a marathon."

"Speaking of the marathon I deserve to be punished for having failed to run it under three hours."

"You do know that it will be a caning in front of every members of the Discipline Academy."

Next morning, a Saturday, I was back at the Crimson Manor Country Club in my Discipline Academy uniform. The kilt felt shorter than before, and my knickers seemed to have shrunk. Mr Martin-Lewis was surprised to see me. I gave him my Paris Marathon time sheet.

"Not bad, only twenty minutes over three hours."

"I want to join the District Remedial School, retake my A-levels and attend law school to be a lawyer. I need to know the price failure."

"You want to know if you will be able to take their discipline?"

"You do know that it will be a severe caning, with the cane for big girls."

"Very well, you will be caned in front of your former chums."

He took a dark rattan cane from his umbrella stand, and had it singing as he swished it through the air. I shuddered, and almost wet my knickers.

He grabbed one of my ears, and red face I followed him across the lobby as if a ten year old about to be punished. He again had his cane whistling and visitors didn't need subtitles. He led me to the fitness room with all the machines and announced, "Julia will be caned for having failed her marathon.  Adrian, please join us in the gym with Louise, Michelle, Johanna, Amelia, and Lucinda."

Head down, I faced my ex chums and Mr Martin-Lewis ordered, "Take off your skirts and knickers, and bend over the gymnastic beam over there. I was quite self conscious of my bare bum being up in the air. Knowing that Adrian was present I kept my legs as tightly closed as possible.

Then there was that hissing sound followed by a THWACK! and I felt a streak of fire blazing across my nates. I cried out, "AH! AIE! OUCH!"

"You should be ashamed of having to be publicly punished, spread your legs wide!" 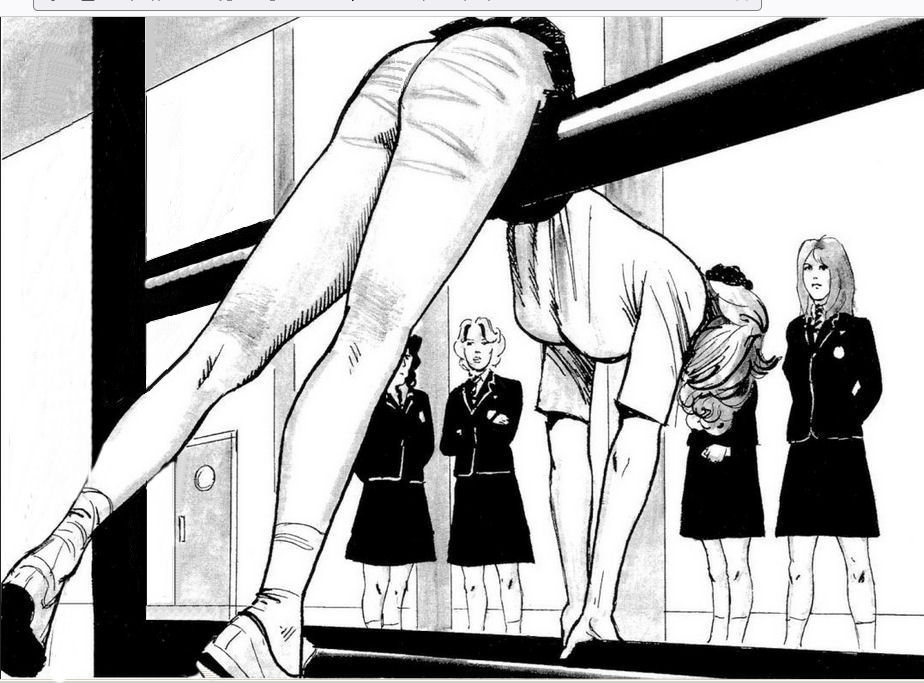 I hadn't expected that. I felt my ears tickling as I shamefully blushed while exposing myself. Five fiery strokes followed.

"And for your greater shame, the naughty girls' stroke to decorate your thighs under the hem of your uniform skirt."

"You may stand and rub your bottom."

I was sniffling as I stood. I shamefully rubbed my derrieres and thighs in front of everyone present. I was well punished, and at the same time the more determined to improve my performances.

One the way back home I pushed my bike instead of riding it. I was quite self conscious of that stroke etched across the back of my thighs. I carefully avoided that boys' school.

Monday morning I donned my longer skirt, which felt too short. Twice I looked in my tall mirror and figured that I wouldn't be showing my naughty girl's stripe if I was very careful.

At work Mrs Forsythe must have seen how I was fidgeting in my seat, and I couldn't help imagining her eyes being riveted on the hemline of my skirt. I should have known that I couldn't always be careful. I eventually had to bend down to access the lower drawer of our common filing cabinet and my senior colleague mouthed a surprised, "Oh!" before adding, "You were again caned, but haven't you left the Discipline Academy?"

I was cornered. I had to tell her that I returned to the Academy to confess how I failed to run the Paris marathon as I had hoped. "I asked to be punished. I had to know the price of failure before joining the Remedial School."

She nodded as she said. "The CEO has signed the firm into the program."

To be continued with District Remedial School... 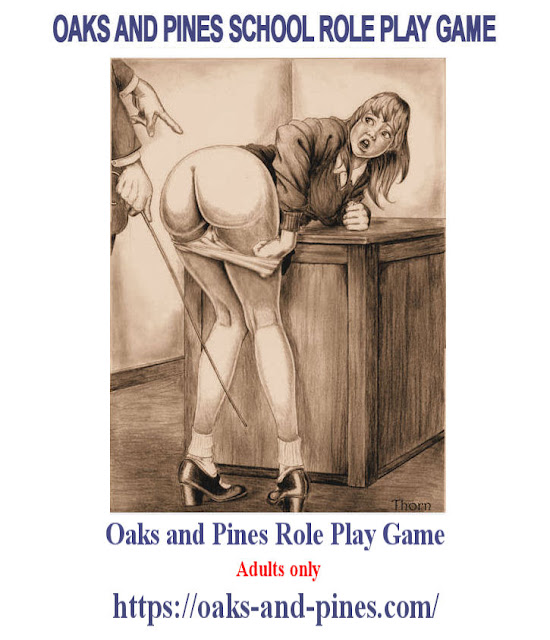