After having visited the doll museum, and virtually played dressing up antique dolls, we were on the way back to Saint Agatha. On the edge of the old town center, Helga discreetly pointed to a small old stone house. The engraved sign above the wooden door was ancient, and quite clear: Korrekturhäuser für mädchen.
We stopped in our tracks as we saw a young woman close the door behind her. She had one hand on the door handle, and the other one was gently rubbing her derriere, covered by a shortish schoolgirl skirt. She turned around, and we saw that she was older than us and blushing. She must have been twenty-four. The upper age limit for being called to a Korrekturhäuser.
She was rubbing her skirt over her bottom with both hands as she walked down the few steps leading to the sidewalk. She must have realized that such rubbing might draw attention, and stopped, although her bum must have still furiously throbbed. She unlocked her bicycle and pushed it around the first street corner.
We speculated. "She failed to graduate, and has to attend a remedial school before retaking her exams..."
"It explains her short schoolgirl skirt..."
On the bicycle patch I called out, "Wait for me!" and zoomed through a yellow light with a prayer that it wouldn't be red on the other side. It wasn't, "Phew!"
Back at Saint Agatha, when I locked my electra-bike with help from my bracelet, it beeped. I scanned it as soon as I was inside. "Good Afternoon Sophie, you have been awarded two more demerits for having ran a yellow light. You now have four demerits." I sighed. 'I am an idiot!'
Sunday morning, we were spared the morning exercises. Instead, we had mass with the priest being a hologram. It was kinda dated, holograms are so old-fashioned!
For lunch, we hosted the boys from the local college. They looked yummy, with their Sunday best of English grey shorts and matching knee-high socks. We were looking forward to be spending the afternoon with them. Helga's beau introduced a friend named Diederick. He was tall, athletic, blonde with blue eyes. He was a heartthrob! I gave him my best smile. He said in French with a warm voice, "Enchanté de faire votre connaissance Mademoiselle !" And ceremonious bowed.
I answered in German, "Ich bin geehrt !" and elegantly curtsied.
The lunch serving robot offered guinea fowl legs with roast potatoes and chanterelles mushrooms, after an asparagus starter. I told Diederick that I was on the comity for the Sunday menu and suggested the asparagus.
After lunch, we sat on the grassy bank of the river by our sports field. He complimented me for my German accent. He gently landed a hand on one of my knees. I laid back on my elbows. His hand moved up under my skirt as he laid down on one elbow next to me. I closed my eyes as his hand rode up my thigh. I wasn't disappointed. I got a lovely kiss. Later, he asked if I would see him again. I enthusiastically promised.
The boys had gone, and quite a few of us had glowing cheeks. We discovered that the nuns had kept their eyes wide opened, and that they have double standards. They hadn't objected to our kissing and petting, but! A few of us were called out. I was one of them; and we were ordered, "Lift your skirt! If your knickers are wet, you will be whipped with the klopfpeitsche for ribaldry."
I could feel the wetness of my knickers. I was doomed and furious. I chided myself. 'You shouldn't have allowed Diederick's hand under your skirt. I slowly lifted my skirt with an embarrassing blush.
We were four to have wet knickers, four newbies.
"Follow us into the gym."
Once there it was, "Take your skirt and knickers off and stand under the exercise bars."
The next order wasn't a surprise. "Grab the exercise bar." I was on tip toes as I obeyed, and exposed my reddish tuft. "Each time you let it go, the front of your thighs will be whipped, and you won't like that."
The punishment started with a severe whipping of my derriere. I knew the sting of the martinet. I danced, but I didn't let go of the exercise bar. Then came the whipping of the back of my thighs. That was something else! Maman had never whipped my thighs. "Oh! Ah! OUCH! OUCH!" I danced the more! Twice I couldn't help letting go of the wooden bar and twice the front of my thighs were whipped. "Oh! ARGHHH!" It was fierce. 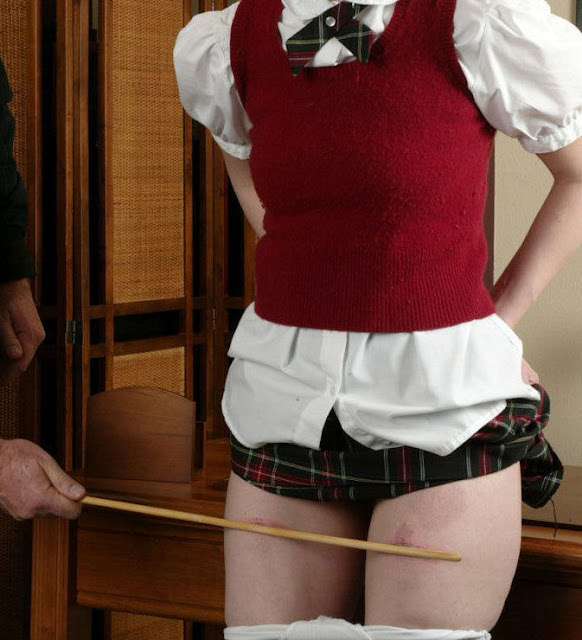 We were finally told to pull up our skirts. "Don't put back your knickers, go and get a clean pair. Two demerits will be added to your punishment record!" With my wet knickers dangling from one hand, I shamefully rubbed my thighs with the other one as I hurried to my dorm. I again lambasted myself, 'You can't say that you didn't deserve that, and you now have six dems, you will have to visit the punishment hauser.'
Back to our dorm, I adjusted my skirt in front of our tall mirror with a deep blush. It was too short to hide my vividly streaked thighs. I knew that for at least two days the shameful stripes decorating the front of my legs would be telling every one that I had received the martinet as a wanton girl, une vilaine fille !
Sophie
To be continued...
You are invited to role-play with us 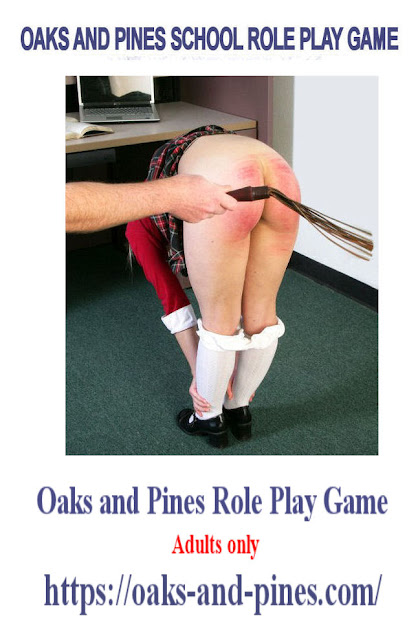