I wasn't the only one to be staring at that martinet while Monsieur corrected our test papers. I even mentally pronounced it as we were told, 'mar tee nay' without the final T.

Monsieur stood and descended from his professorial platform to give us back our corrected papers. I almost wet my knickers when I saw that I had 7/20. I knew what it meant, and didn't have to wait.

"Alicia, 7/20, you should be ashamed of yourself, and I will make sure that you are! Come to the front of the class, stand on my platform facing the class and take your knickers off. Drop them on my desk and raise your skirt front and back."

I gradually blushed. First as a pink rose when standing on the platform in front of my classmates. Then as a reddish tulip, as I took my knickers off as discreetly as I could. Finally as a deep red peony when I raised my skirt and exposed my curls and derriere. 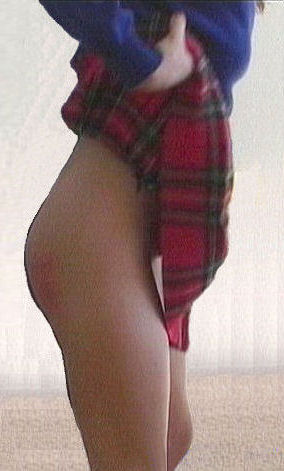 Monsieur didn't stand next to me on the platform, he remained on the floor, probably to better address my seat of learning with the martinet. "You will be given 12 strokes on your derriere and thighs, each time you drop your skirt, the stroke will be repeated."

I got two strokes on my bum. They were very stingy. They were followed by a stroke across the back of my thighs. That was stingier than the first two. I dropped my skirt and danced. I raised it again, and the stroke was repeated. I again danced, but kept my skirt up. Next the front of my thighs felt the martinet. It was stingier than stingy. I again dropped my skirt, "AIE!" It was repeated, "AIEEEE!" Those two were the worst so far.

That dancing lesson was repeated twice. Each time the martinet caressed my thighs I dropped my skirt, and the strokes were repeated. I received eighteen strokes, my bum and thighs were fiercely throbbing.

"Keep your skirt up and stand by that wall facing the class."

Quite contrite and red faced, I lowered my head. I promised myself to learn that test by heart.

I wasn't the only one to be given la fessée cul nu au martinet. Josy aka Josephina was next and she was lucky not to have to keep her skirt up. 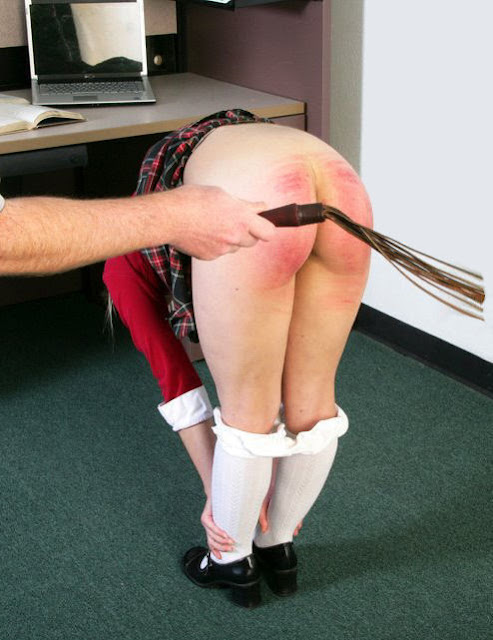 Lunch followed, and it was very French and superb. The Chef offered to teach each of us a French dish. I enthusiastically raised my hand and asked to learn how to prepare a cassoulet.

There was no resentment after that taste of the martinet although a few of us were still rubbing their thighs. Josy teased. "We now know that you are a real red head!"

Everyone around the table giggled, and while blushing, I returned the compliment, "And you're a real blonde!"

Amelia was still having rosy cheeks for having showed us that she is shaved, but none of us teased her.

The afternoon was about singing in French to work on our fluency and accent. Two of us couldn't sing. Monsieur understood and had them theatrically recite lines from Les Misérables. He taped us, replayed our performances and mimicked our worse mistakes.

"When teaching a classroom of thirty pupils the professor can't do more than give you the pronunciation." He added, "If you can't pronounce a word, do your best. To be fluent isn't about having a perfect French accent, it is about having an easy flow."

He was very good at having us repeat till having a proper accent and flow. He even created silly phrases adapted to each of us. For me it was about the S with, 'Les chaussettes de l'archi duchesse sont elles sèchent archi sèches ?'

Later, we gathered in our common room to sew our name tags and reverted to English. Josy summed up. "That martinet was so stingy!"

"I was in France as an exchange student, and I got a super whipping."

"Don't tell, let  us guess. You were caught with a French boy having his hands under your skirt?"

She smiled and shook her head negatively.

"His hands were inside your knickers!"

She blushed with a wide grin and we laughed.

I was rubbing my decorated thighs, and she added, "On the thighs, the welts take an extra day to fade. It was quite embarrassing when I had to go to the boulangerie for bread."

After dinner we watched "Les Misérables" in French. 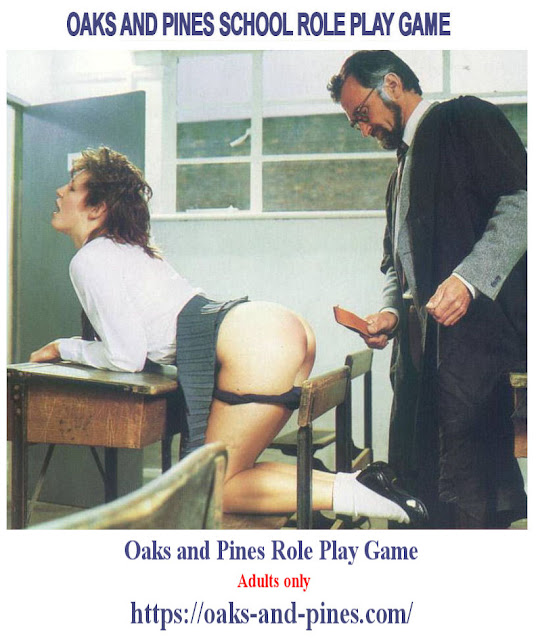