After dinner, the girls of our dorm were real nice. They offered to rub our bums and thighs with a soothing balm. We blushed, and they laughed. "No need to be shy. "We've seen it all!"

Louise teased me. "You are indeed a real redhead!"

June was teased by Annabelle. "And you're a real blonde!"

Melissa imitated the voice of Miss Principal. "Take off your burumas!"

We eventually did, and they gently rubbed our sore bums and reddened thighs with their after spanking balm. Then they announced, "It's television time!" With our burumas back up, we followed them to a very large room with all sorts of fitness machines facing several huge television screens.

A coach approached us. "You are into modern dancing and have a few pounds to shed." We nodded. She obviously had a memo about us. She chose two different machines, pulled them side by side with our help, and told us to alternate every 20 minutes.

Later, our dorm sisters told us to take the two bathtubs of our attached bathroom. They had us soaking with Epsom salt. "It will help with your bruising." Next we slept like babies.

We were awakened by a nasty bell, and Louise told us. "Out of bed! Into your burumas, don't forget the ankle socks, you will be inspected!"

Annabelle mentioned. "The last one on the field will be spanked!"

Lucinda wickedly added. "Later, while we are running on the beach, there might be a few joggers. They love to watch girls with red butts!"

We jumped into our burumas and flew out of the mansion! A girl from the third dorm was the last one. She got the famous Whippingham spanking, a bare butt spanking from a very fit coach, no less than one hundred vigorous smacks. Her bum and thighs were glowing. She frantically rubbed while running with all of us.

As Annabelle had said, there were a couple of joggers on the beach. I was shamefully self conscious of exposing the evidence of my punishment. I ran as fast as I could. June tried to adjust her burumas while running and tripped! Miss Coach encouraged her. "Stop dallying Missy, or I'll dust off the sand from your bum with a good spanking!"

Back at the mansion, it was no surprise to see the last girl from the run getting a super spanking. The coaches must have callous hands.

Then it was the weighing ceremony. Next to a professional scale was a black board with all our names and weight. "April and June you are next. Since it is your first day you have nothing to fear, but I want you to lose a pound by tomorrow morning. We will be monitoring what you are eating. You are not to starve yourselves to shed that pound. You will have to be careful with your diet, and exercise. In other words, you will have to sweat it out, or you will be punished!"

A girl who hadn't lost a pound as told got the classic hand spanking. Another one who had gained a pound was belted. As for the one who had gained two pounds, she was told to go out and cut a switch. While watching those punishments, we winced, and apprehensively rubbed our butts. Louise, who had tasted the switch, whispered for us. "That's a major ouichie ouch!"

Next were showers and breakfast. I had one fried egg on a toast, and a fruit salad. Before joining our tables, a coach examined all the trays, to make sure that we have a proper meal.

Miss Principal announced. "Mr. Muesli our nutritionist, is back, and we will again have our dietetic classes. You will be wearing your classroom uniforms."

Back at our dorm, our chums showed us our blouses and uniform skirts. We noticed how short those skirts were. They laughed, "They are meant to be easy to raise!"

I touched my toes and asked. "Anyone sees my knickers?"

They all giggled. "We do, and we also see that you were a naughty girl!"

"Mr. Muesli will be keeping an eye on you!"

June was alarmed. "He is a man, and he will spank us on the bare?"

June blushed, and so did I. 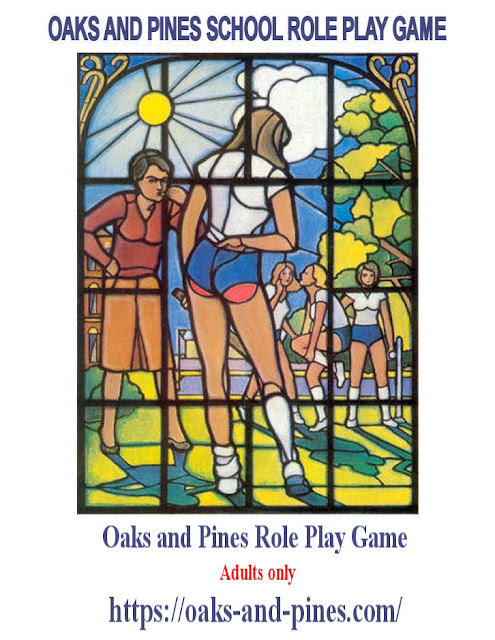