Penny, one of the tellers, pushed my door and was invited to have a seat. At first she was quite shy, but she gained confidence.

"Miss Alicia, you may not know that our manager's secretary is my aunt. She told me that your future secretary in Calais is retiring. I would like to replace her. I understand that I will have to be French fluent, both my father and my aunt are willing to pay for that ...huh... special school. As a branch teller, I have no future. Please take me with you Miss."

I guessed that her aunt must have come across the invoice for the Ecole Ecarlate and added two and two. Still feeling that belting, I painfully fidgeted in my seat, but managed to keep a smile for Penny. Having a devoted secretary is one of the secrets of success. I accepted her offer with a great grin.

"Yes, I will be happy to have you tag along."

"You won't regret having me I promise!"

"You don't have to be perfectly fluent as a secretary, two cessions should be enough, but that school is no picnic!"

While saying that, she absentmindedly rubbed her mini-skirted nates.

I laughed, "That was l'apéritif!"

"I am hoping not to be caned."

I philosophically added, "We can't have an omelet without breaking a few eggs, that's a French saying."

Later when she was chatting with our accountant I imagined her red bum showing through her white skirt...

For dinner, I joined Josephina at out village's coffee shop. "Yoh Josy how's you?"

With a smile she said, "Yoh Alice, I am well, but my bum is still smarting! Poppa gave me a belting for my poor grades. He made me dance! I hadn't danced as much since I was in college. I got two dozens!"

I told her about my own punishment.

I blushed for the memory.

A few days later, Monsieur Maurice welcomed us back at the Ecole Ecarlate. We had assembled in the lounge and he called us one by one in his study. As I demurely stood in front of his desk he inquired, "Have you showed your report card to your parents?"

"Yes Sir, but it wasn't exactly my father."

"Hopefully you were nonetheless severely punished."

"Yes Sir, and I was told to give you this letter."

I handed the sealed envelope "Uncle" Harry had given me. Monsieur Maurice opened it and read aloud, "At her father's request, I have punished Alicia for her grades, being below the requirements of your esteemed establishment. She is to show the evidence of her punishment for the school to further chastised her if my ministration wasn't up to its standards."

I didn't know what "Uncle" Harry had written. I sure didn't imagine those lines. and blushed as a peony as I heard them.

Mr Maurice frowned. "What are you waiting for Alicia?"

I blushed the more and turned around. I slowly raised my shortish uniform skirt over my reddened thighs. I remembered the marks escaping my knickers for having looked this morning into my tall mirror.

He approved. "You were well punished. Make yourself presentable and turn around."

I could feel that I still had quite a blush as I again faced Mr Maurice.

He paused before adding. "If you again have poor grades after this cession you will be presenting Monsieur Harry your report card with a complimentary cane provided by us."

Later in our dorm room we were as curious as kittens in heat. We teased each other. "You got a good belting, and it shows if you aren't careful to keep your skirt down." Josy and I hurriedly tugged our skirts down with a blush.

Another girl chimed, "Don't be such prudes!" She raised her skirt as she said. "I also got a belting."

She blushed crimson, and we chanted, "Raise your skirt! Raise it! Up! Up! Up!"

She eventually raised it as we danced around her and those behind her stopped dancing with ohs and ahs. 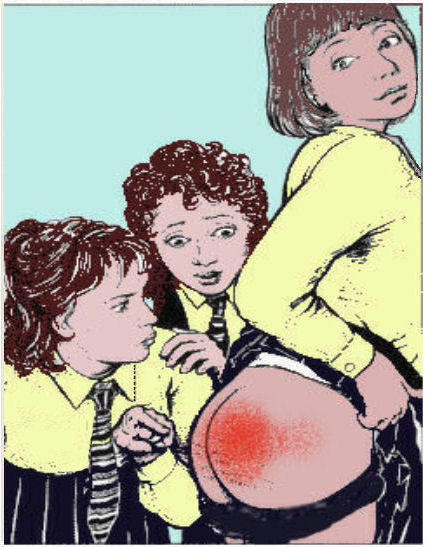 "She was caned, and it looks like six of the best."

"Your report card was that bad?"

"Only 9/20 for grammar and Monsieur Maurice had written that I should be severely punished. Mom got my bro's cane, and I got six."

Geraldine had brought a bottle of bubbly and she got two glasses.