The martinet or klopfpeitsche as they call it over here had me doing the dance of the lazy schoolgirls after having again flunked the German grammar test. It was also very embarrassing, to say to least, to have performed that dance bare from my navel to my socks in front of my classmates. Later that day in bed I had to admit that I had deserved that punishment for having felt that studying grammar is bellow myself. From that day I did study grammar and had no less than Bs in German, French or English grammar tests. Saint Agatha isn't a "discipline college" for nothing, and my choice after all.
For weeks I was a good girl and I even made the school's Roll of Honor with Heidi, my ambitious roommate who wants to be the next President of the Union.
Then I again had 'le feu au cul' and stumbled on the debauchery rule as I was caught without knickers in the guests' locker rooms which had been opened for the visiting boys. I refused to formally name Diederick my boyfriend, and he escaped a month on a youth chain gang. I was further offered to be spared the martinet if I named him. I again refused and I got the martinet and six demerits which was enough to have me return to the korrekturhäuser.
Later when I scanned my bracelet the metallic voice announced that I have nine demerits, "...one of your demerits for that failed German grammar test was erased for being named on the Roll of Honor."
All my roommates agreed, "Its the whipping machine !"
I was of course quite anxious, and had dozens of questions.
"It won't peel off the skin of your bum..."
"It won't even bruise as the senior cane would."
"Yeah, the senior cane is the next step!"
I remembered the junior cane and had a couple of mild bruises.
"...but it will sting!"
"Sting like hell!"
"We'll be here for you afterwards."
Next day I was ten minutes before the appointed time at the town's house of correction for young ladies. The scanner read my bracelet and it was a blushing embarrassment when the machine mentioned my misdeeds out loud for everyone in the room to hear. My companions of misfortune looked me up when they heard debauchery and that I have nine demerits. I joined them on the plastic chairs and we kept our eyes on the door with the plate reading  korrektionraum.
It was opened by a bank employee, she was wearing the uniform of a local bank with a short pleated skirt. As she frantically rubbed her bottom with both hands her skirt rode up and we saw her vividly streaked bum as if she wasn't wearing any knickers.
I was next, and standing in front of the desk of the punishment lady who scolded me, "Nine demerits ! It must be a record. Debauchery and a failed test... let me look up your record. I have a feeling of deja vu... Her computer confirmed her feeling, and she gave me another ear full, "Repeated ribaldry, and again failing the same test ! Its the whipping machine for you ! Take off your skirt and knickers, and bend over that bench."
I obeyed and felt my very bare bottom well exposed. The moment of truth had arrived...
"You will have the hots for a good reason !"
I saw her attach a tail of leather to the arm of that contraption and it squeaked as she wheeled it next to my quivering bottom. I felt her fingers measuring the distance and further squeaking. 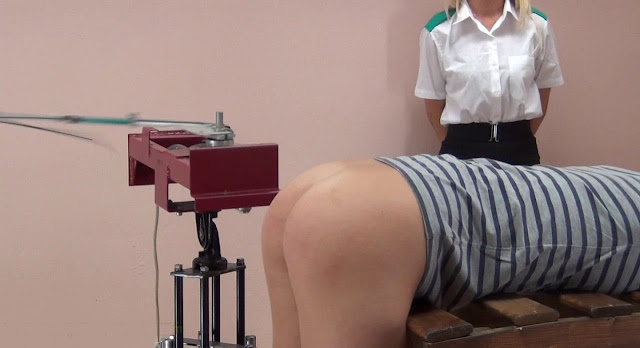 Then it was a mean hissing sound followed by a streak of fire!
"OH! ARGH! OUCH!"
I heard the creaking of the machine's arm returning into position, and it was again that hissing whizzing sound followed by another streak of fire!
"OHH! ARGHH! OUCHH!"
Again, creaking, hissing, whizzing and "OHHH! ARGHHH! OUCHHH!"
I wriggle my bottom in a vain attempt to cool it...
Creak, hiss, whiz and "OHHHH! ARGHHHH! OUCHHHH!"
My bum was on fire and wriggling it didn't help...
"OHHHHH! ARGHHHHH! OUCHHHHH!"
sniff ... sniff ... :'( ... I am sorry .... sniff ... :'(
"OHHHHHH! ARGHHHHHH! OUCHHHHHH!" 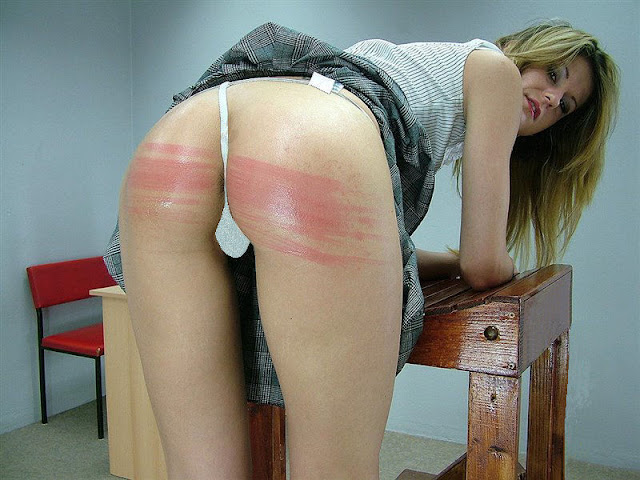 "And the last two across your thighs...
"OHHHH! ARGHHHH! OUCHHHH! OUCHHHH!"
I pedaled and danced, and  when I was allowed to stand I kept dancing with both my hands frantically rubbing my incandescent thighs.
Then she gave me a pair of skimpy thongs, "For as long as your bottom and thighs show evidence of you punishment you will wear those. You will for sure keep your skirt down for a few days! Here is a spare pair."
I had to let go of my burning bum to slip on that revealing string, and my derriere felt quite naked. Next was pulling up my skirt, and more rubbing of my throbbing nates and thighs.
As I closed the door of the Korrekturhäuser für mädchen behind me, I discovered Diederick...
Sophie
To be continued... 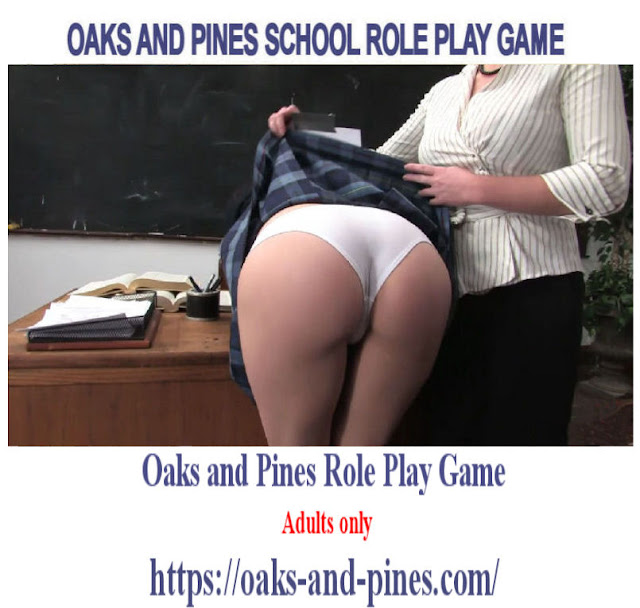