Monday morning we called a sickie at the bank, and reported to the Municipal Constabulary. We were again wearing those minis. We didn't have much of a choice, it was part of our punishment. We were early to avoid encountering some old lechers.

The young assistant at the counter indicated two soft chairs for us to wait for the Sergeant. We imagined that she must have noticed our decorated thighs although we kept tugging down our skirts. We thanked her with wide smiles.

A few minutes later she had to pick up a document which had rudely landed on the floor. We discovered that she is isn't too old for Pop or Mom to properly correct her shortcomings. 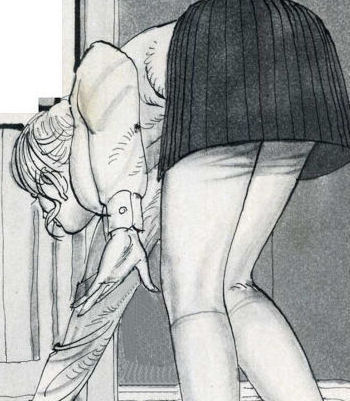 The Sergeant was jovial as he led us to his office. "You both look great!" He closed the door, and it didn't offer much privacy. It was a clear glass door with nothing more than his title and name to impair the view. We couldn't help a frown for his halfway down glazed wall with the corridor, we had forgot about it!

He sat at his desk, and we didn't mind that we weren't invited to sit. "I will be taking pictures to close your file, not to worry about your privacy, it will be only about your derrieres."

He had a laugh as he said that, and we blushed. We soon blushed the more when he ordered. "Turn around and raise your skirts."

We were as red as poppies as we obeyed. There was a flash, and we heard hurried steps in the corridor, some constables obviously had an eyeful! 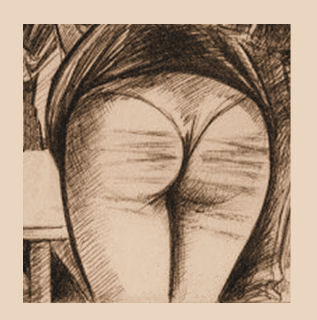 We hurriedly adjusted our skirts, and were still crimson as we again faced him. He asked. "Who was it?"

"He did a great job. I will have to tell the mayor. There's a few more naughty young ladies who could benefit from a good caning!"

We were soon out on the street. It was still early, but there was a few more passerby. We had to decide if we would return home as fast as we could with pedaling high above our saddles with skirts flying high. We didn't dare, we tried sitting on our minis, but they were too short for that. We did our best to hold them down with one hand while the other was on the handlebar.

It reminded us of the reverend having said. "Cane stripes on your thighs will teach you to keep our skirts down to avoid advertising that you were caned as naughty schoolgirls."

"Mildred dear have I told you about the two tarts Mrs Peabody caught relieving themselves by her house in the wee hours..."

"She took a picture of them with skirts up and knickers down, and reported them. They were fined, and couldn't pay. The Mayor kindly offered the alternative of an old fashioned caning."

"With four daughters our Mayor sure knows how to deal with girls!"

"Do you think they are the same girls?"

Needless to say that we blushed to our ears, and tried to further tug down our minis while pedaling faster.

Once back home we again crammed together into the bath tube for a long soak with Epsom salt. Later we massaged each other's striated bums with Arnica.

Next day at work, we wore longer skirts, and tried not to squirm when sitting. Just in case we did we had prepared a little story… 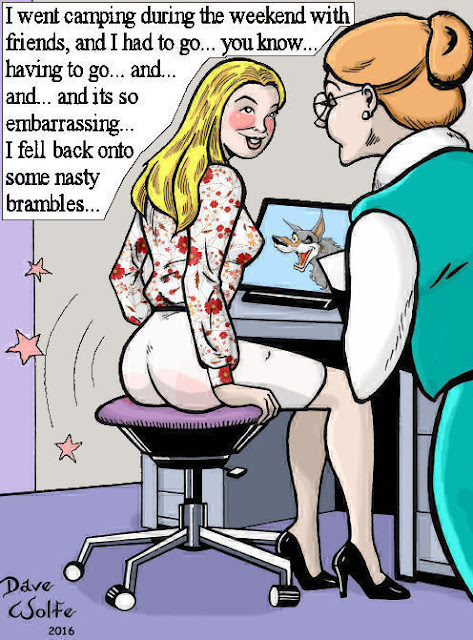