Then it was time for dinner, and Helga led me to the dining room. It was quite impressive, with its ageless stone vaults and sturdy wooden tables and chairs. The buffet was in sharp contrast as a robot welcomed me with, "May I scan your bracelet please..." Having done so I was greeted, "Good evening Miss Sophie, tonight I have for you ham and mixed vegetables in a light mustard sauce or rice with salmon in sorrel sauce..." I guessed that I wouldn't be offered a third choice, the machine knows what's best for each of us. I choose the salmon..." A tray appeared within the robot's belly.
As Helga led the way to a table with two girls, I saw how our shortish skirts did a poor job of hiding the reddened thighs of the girl who was punished in the study hall. I remembered having read a magazine about the miniskirt fashion of 1970.
Helga introduced me to my roommates as we sat for dinner. "Heidi and Margit, this is Sophie from France."
They teased, "Welcome Newbie, pull up your socks or pull down your knickers!"
I nervously giggled.
After dinner, the game room was for those who didn't go straight to their dorm room for more studying. As I didn't have any homework, I sat in one of the immersive bubble chairs and picked up one of the gaming helmets to play Galaxy Warrior Queen.
Later, after exchanging night-night with my roommates, I pulled the thick sound and light proof curtains of my room-space, and read more of the Saint Agatha handbook on the tablet I was issued. At 11 pm on the dot I got a message from the central computer flashing on my tablet, "Dear Sophie, you have one minute to turn off your lights or a grade one offence will be recorded." I hurriedly switched my lights off!
I was awakened by an old fashion shrilling bell and Helga poked her head through my curtains. "Morning exercises and run, singlet, gym knickers, trainers, don't forget the socks or your sports bra!"
I hurried, and she added, "Those late will be punished, and as your "sister" I'll be punished as well if you are late." I rushed. I didn't want Helga to be punished because of me.
Helga and I weren't late as we assembled in the garden of the cloister. The last one was pulled over the knees of a nun wearing a tracksuit. She pulled her gym knickers down and spanked her bottom and thighs till crimson. I tried counting the smacks, but she was so fast I lost count after 37. I mused, she must have callous hands.
We followed the nuns and behind the old convent I discovered a soccer field circled by a running track. At one end was a covered pool with changing rooms. We were lined up and a very athletic nun led us into a set of exercises before having us race around the track. I was panting, but I wasn't the last one. Another girl had lost the race. A nun pushed one of her knees between her legs as she spanked her. I blushed for her and again tried to count the smacks. I lost count at 47...
After showering and having dressed, I was famished, but the breakfast robot was generous and gave me a satisfying cheese omelet with roasted potatoes.
For my first lesson, we had a quiz. One hundred questions on German grammar. Although I am bilingual, thanks to my mother, I was worried. On the big plasma screen above the supervisor I read, "The minimum grade to avoid failing is 70% Foreign students will be given a 10% advantage over German students." I worked on my tablet as fast as I could. An hour for 100 questions isn't much. I had 5 minutes to spare and scrolled back. I worked till my tablet was frozen by the central computer.
The results soon flashed on the large plasma screen for all to see, "The following girls will be punished, "Helena, Margaretta, and Sophie, please come to the front of the class..." As I stood my tablet came back to life. I saw that I had 65% with the foreign student bonus.
I was already blushing with shame as I walked towards the front of the classroom. A nun grabbed my ear as if I was a ten-year-old and bend me over her knees. I had both my hands on the floor when I felt my skirt being raised. She pulled my knickers down to my knees and I had a very hot flush as I blushed the more. I was going to be spanked on the bare in front of my fellow students as a naughty schoolgirl.
Then it started ! SMACK! SMACK! SMACK! SMACK! SMACK! It wasn't the spankings of MoSup back in Rodez. It was a spanking for a big girl. SMACK! SMACK! SMACK! SMACK! She alternated between my bottom cheeks and my thighs. SMACK! SMACK! SMACK! SMACK! My thighs were first to burn, but my bum soon followed. I had never received such a severe spanking. I was sure to have showed everything I have. I started bawling and squirming. She had one leg over mine and brought one of my arms behind my back and continued, SMACK! SMACK! SMACK! SMACK! She finally announced, "One hundred." I was sniffling...
She stood me up. "Keep your hands on top of your head." With my skirt rolled up and my knickers around my knees, she led me by an ear to stand in the corner. It wasn't actually a corner, it was a side wall in view of the whole classroom. Still sniffling as my sisters of misfortune, I exposed my throbbing derriere and thighs to the gaze of my classmates. 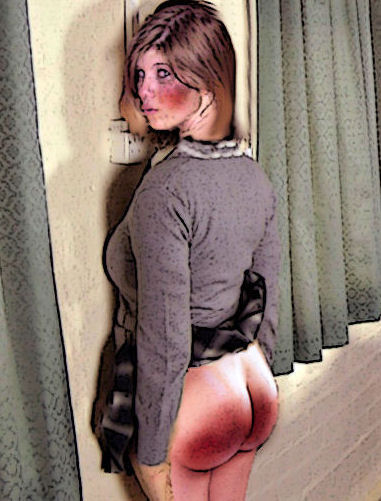 I was no longer an eighteen years old college student. I was a lazy schoolgirl who had received la fessée cul nu in front of the whole class.
To my greater shame, I had to admit that I deserved that punishment as I never worry about German grammar. Next to me, hanging from its peg, was the German martinet, the klopfpeitsche. It was a warning.
Sophie
To be continued...
You are invited to role-play with us 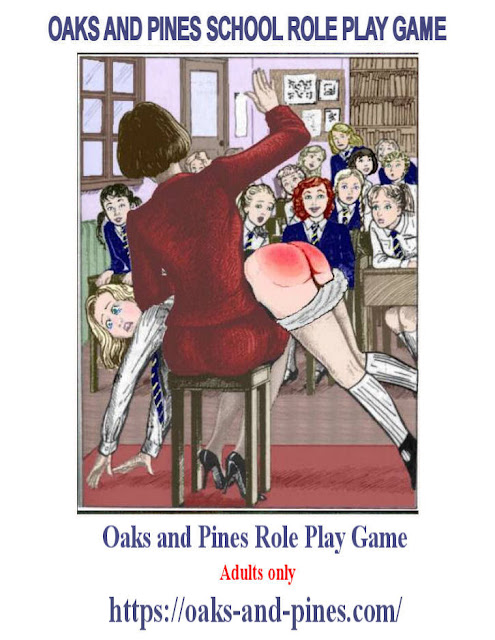