In 2040, it was decided to end co-ed policies in European colleges to promote better academic results, thanks to less sexual temptations.

As a good French girl of eighteen, I had my baccalaureate with honors and A+ in German. It was easy since as I am bilingual. I am hoping to teach German literature at the Sorbonne. I applied for the Saint Agatha Discipline College of Babenberg, Germany, through our twin cities exchange program.
All my friends were alarmed. "Don't you know that they have corporal punishment centers for girls in Bavaria?"
"And you will have to wear a uniform!"
I shrugged. "We had our baccalaureate at Saint Marie, had to wear a uniform and Mother Superior has a strap!"
"Yes, but she has never strapped anyone!"
They were discounting the fact that the lovely MoSup had spanked each of us quite a few times. I hadn't mentioned that Saint Agatha is a Discipline College. They wouldn't understand that I am determined to succeed and choose Saint Agatha because of its high success rate. I was quite conscious that I might taste das schlag if I didn't have satisfactory grades.
A week later, I had a lengthy email from Germany. I was accepted, and I had a ten megabits handbook to read!
Maman drove me to Toulouse, and I took the TGV for Paris, and from there the Maglev to Frankfurt. At 600 k/h, I was there under two hours.
"Papier, bitte!" said the officer. I gave my French holographic ID card. "Please look at the camera and keep your hands on the scanner, bitte."
I was given back my ID card with a reminder. "Fraulein, please remember that our new laws stipulate that you are a minor till turning twenty-one. I see that you will be in the care of the Saint Agatha College of Babenberg. A car must be waiting for you. The driver will be informed of your arrival."
The driver was a nun who didn't speak too much. An hour later, I stepped out of the old hydrogen Mercedes in a large enclosed courtyard with garages and bike-sheds. Another nun was waiting for me and I discovered an impressive middle-age cloister circling a large garden with a fountain. As I trotted behind that nun with my suitcase in tow, I saw numerous girls my age chatting and laughing. They were all wearing a uniform with a short navy pleated skirt.
The nun handed me over to yet another nun who issued me a huge bag with my kit. I was showed a changing room, and told to change into my new Saint Agatha uniform. The skirt was shortish!
Next, I met a girl my age who introduced herself as Helga. "I am your 'sister' .... sorta .... I am to guide you."
I thanked her, and she complimented me for my German accent. "I am bilingual, my grandmother and mother are German."
I realized that I wasn't the only newbies with a "sister". Newbies were easy to identify. They were, as me, the only ones tugging down the short uniform skirt.
Helga helped with my suitcase and lead me to the first floor with the dorms. I discovered a huge room to be shared by four girls. She pulled open thick curtains to show me my part of that room and hers. We each had a window overlooking the courtyard. I had a laptop linked to a shared printer. I unpacked and sorted my cupboard.
An hour later, Helga explored my cupboard and said. "For as long as you are in Germany, you are to wear your school's uniform and nothing else." She helped me select what I no longer needed, and it was all returned into my suitcase, which was stored in the property room.
"Next you are to be issued a Saint Agatha badge and bracelet". The badge was about my name, 'Sophie de Rodez' followed by 'Saint Agatha Discipline College U-1/4', which meant that I am in a first year undergraduate.
The bracelet was high tech. "It will be identifying you, opening the doors that you are allowed to open, and pay for whatever you need when outside Saint Agatha." I also understood that I couldn't remove it when told that it is water proof. It was made of silvery palladium and looked stylish.
Helga invited me on a tour of a study hall with a huge plasma screen and tablets pc on each desk. Such equipment was in sharp contrast with the old wood paneling. We hadn't gone further than the antechamber of that large room, and remained behind a sliding glass door.
Suddenly, one of the nuns watching the girls seized one of them by an ear and dragged her in front of the class. 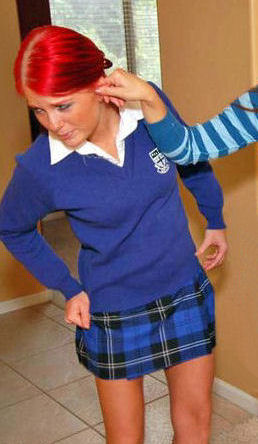 Still holding her by the ear, she sat on a lone chair in front of the desk of the study hall mistress. Then she pulled her over her knees, raised her skirt, lowered her knickers, and vigorously spanked her bum and thighs till crimson. Although we were behind a glass door, we could ear the girl bawling and saw her feet protest that punishment by kicking the floor as she pedaled her legs. She was blushing as red as her bottom, and I guessed that she must be aware of having showed everything she has.
I hadn't counted the smacks, but it was a long and fiery spanking. Once it was done, she was told to face the wall with her hands atop her head, her knickers around her knees, and her skirt rolled up. I also saw a klopfpeitsche hanging from a peg on that wall. I didn't need to be told that it was the German martinet.
Helga explained, "That's for whispering during a study hall session." The nun scanned her bracelet with some handheld device, and my 'sister' added, "That's for updating her punishment record."
I couldn't imagine receiving such a severe fessée cul nu devant toute la classe à 18 ans.
Sophie and Helga
To be continued...
You are invited to role-play with us 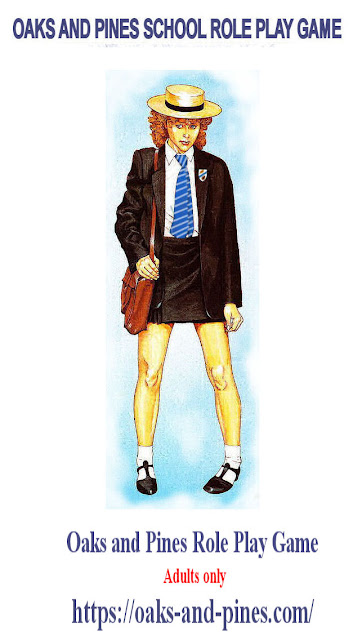