From the large window of his office, Mr Martin-Lewis, my coach, showed me the running track zigzagging between flowery bushes and sculptured shrubs, "I will time you. You already know what will happen if you aren't giving it your best."

Mr Coach had a frown as he recorded my time. "I am going to teach you how to do better!" I didn't dare tell him that I had done my best. He took two steps to grab one of my wrists, and with one swift move I was pulled across his knees as he sat on a straight-back chair. I felt my shorts being pulled down, and I had a hot flush, I was blushing. I was again a schoolgirl about to be spanked on her bare bottom by the principal.

He spanked my derriere and thighs. I shamefully pedaled my legs. He brought my right arm into the small of my back and one of his legs over mine so as to lock them, and continued my spanking. I hadn't heard him count the smacks, and I was too busy wriggling my bum under the smacking inferno to count them!

"Pull up your shorts and run again!"

I had never received such a severe spanking, my bottom and thighs were throbbing. I ran, and ran as fast as I could. It was quite an incentive to know that I was showing to everyone about my crimson bum thanks to the mini shorts, and not to discount my well reddened thighs. I saw the waitress from earlier dressing the tables for dinner. She seemed to have a 'serves you right' grin. I found a second or third puff of breath to speed up.

"Bravo Julia, you have gained 47 seconds!"

He gave me the same mini kilt outfit I had already seen. "You will always wear your Discipline Academy uniform when visiting the Country Club. That also includes the commutes." A small monogrammed backpack with my original clothes, and a spare uniform were also added.

He offered his attached bathroom for me to dress. I looked back in the tall mirror behind the door. If I walked carefully, if the wind is merciful, I wouldn't show that I was spanked like a naughty schoolgirl.

Back into his office, he inspected me and even readjusted my cardigan. Then he slowly walked around me, and suddenly pulled up the back of my shortish kilt and smacked my thighs till I danced on the spot.

"This is to remind you to always give it your best on the first attempt. Next Saturday you will report for your first assessment and confirm your membership. During the week, you will have a training programs tailor made for you, and supervised by my assistants." He finally let go of my kilt, and my thighs were burning.

On the way back home, the wind wasn't too merciful. I twice had to catch my skirt. Next time I'll ride my bike, I'll be home faster!" Worse was to come. I had to bend down to pick up an Amazon parcel too big for my mailbox. I overheard two old ladies.

"Mildred did you know that our new neighbors have a girl?"
"Nope, and look at her thighs, she won't be able to hide that she was spanked at school."
"When I was a girl, Papa said, spanked at school spanked at home."
"At her age it was the tawse or the cane for me."
They obviously didn't know me, that was a relief. I hurried up the stairs to my new apartment. As soon as I had closed the door, I stood in front of my standing mirror and bend down as I had to for picking up that big box. I felt my upper cheeks glowing as I saw my crimson thighs and knickers doing a poor job of covering my well spanked derriere.

I wasn't upset. I thought that it was well deserved. "You want to be able to run a marathon or not? And learn how to play good tennis, yes or no? Next time you give it all you have from the first attempt."

Next morning I raised my mini kilt in front of my tall mirror. "Phew!" my bottom was as good as new. I took my bike out of the garage and leisurely rode to the Crimson Manor Country Club. I was scheduled for swimming a few dozens pool lengths.

It was a relief to know that the country club's pool was privatized for the Discipline Academy girls. I reported to the pool master, "Good morning Sir, I am Julia, a new girl, and I don't have a DA swimsuit."

"Good morning, Julia, you have been assigned cabin number seven where you will find what you need."

I discovered a large towel and a modern high cut one piece swim suit. I held it up at arm's length and understood that it wouldn't be too covering for my bottom. Once I had pulled it up I felt my upper cheeks warming up while my lower ones were mostly at fresco.

I was quite self conscious of my skimpy cossie, but soon reassured when I saw  that all DA girls were wearing the same swimsuit. I again reported to the pool master. He assigned me a lane. A very fit woman in her early forties introduced herself as Josy. "I'll be timing you." I nodded, and she warned, "Don't pee in the pool! There's a special chemical, and you will be spotted."

I gave it all I had, and Josy was satisfied, "Phew!"

The girl in the next lane had disappointed her. She pulled the back of her cossie into her rear valley after having bent her over her knees. Then she gave her a very severe spanking, and told her to redo her lengths. We saw that the back of her swimsuit was still up into her crack, and fully exposed her crimson bum. 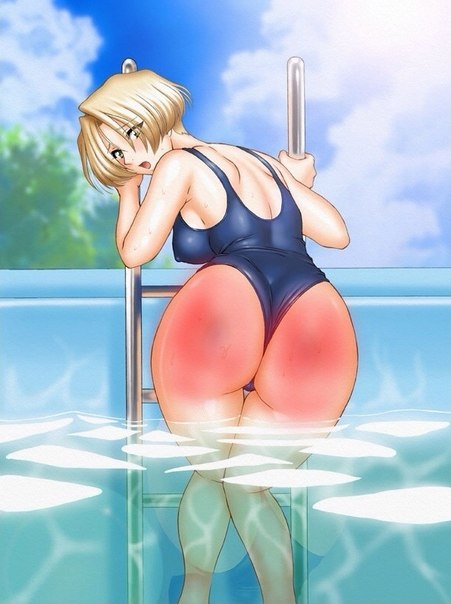 Later, by the showers, I met a few girls. They were all in their twenties, as me. I told of my goal of running the Paris Marathon. One of them, named Daniella, enthusiastically chimed, "Same here, and we'll have a romantic dinner at a street side café on the Place Saint Michel, with a pair of dashing young Frenchmen."

Michelle, the girl who had to be encouraged, was rubbing her bum with her mini kilt, and we guessed that she is a newbie when she said, "Whoa! I have never received such a severe spanking."

Johanna laughed, "Hahahaha! That was only an appetizer! Wait till you get the martinet or the strap!"

Another girl named Amelia added, "And it's the martinet each time you're late!"

She was curious of the martinet as I was.

Johanna answered, "It stings like the devil, but it doesn't bruise. After two days, the marks are gone." 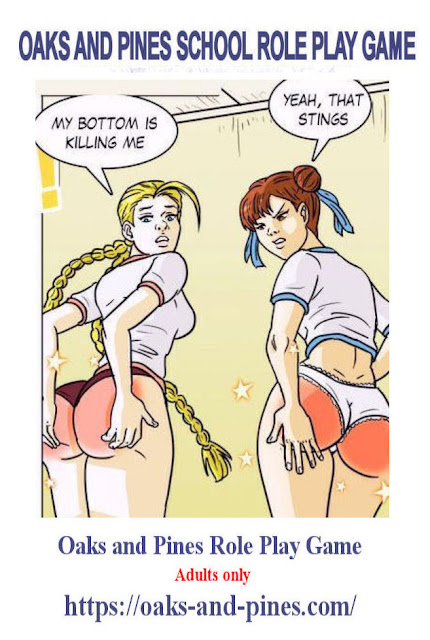