I was again sitting as a good girl at the bank, meaning that I was no longer squirming in my seat as a naughty girl with a well smacked bum. At the Frivolity Shop, Nancy couldn't help an occasional rub, and didn't model her latest lingerie collection. She invited Jeremy and I for dinner. Her boyfriend teased, "She made the team at the tennis club, she got a sorority paddling, wan't to see her well reddened derriere ?" It was quite mean, but Nancy had a surprising glint in her eyes... Jeremy with a wide grin answered, "I would..." I interrupted him with a resounding smack to his closest thigh.

A few days later at the tennis club we were preparing for a major competition with a London club. Miss Davenport had turned into a sergeant major. She was drilling us into various muscular exercises. On the grassy slope by the courts she had us doing press ups, legs up pedalling, abdominal crunches. She also regularly threatened to use our sorority paddle. "A crimson bare butt paddling in front of the whole club might work wonders..."

I mused... Our skirts are quite short, there must be more than freedom of movements and tradition about that... Nancy's upper cheeks blushed as red as her lower ones with the toe touching exercises... Thanks to Jeremy's massages my bum had recovered its peachy condition... We also had some steamy evenings... There must be something more about having a burning bottom...

My reveries were interrupted with Miss Martinet Davenport calling us on the main court, "We have one of the umpires visiting. Please welcome Miss Hildegard. We politely applauded. Nancy whispered, "She has a mustache !" I hushed, "She looks like a grizzly." She announced, "Girls we are going to have games as if on the day of the competition..."

Miss Davenport paired us. We all had to face a team member a touch above our league, for me it was Edith. She has a bitchy reputation. She also played as a bitch with aiming for the sidelines.

After two controversial sidelines which weren't spotted by Miss Hildegard Grizzly Umpire I exploded. "Its out ! All of her sidelines were out ! She deserves a red card ! Then I over stepped the mark, "Do you need a pair of glasses ?!"

She jumped down from her tall umpire seat and charged towards me blowing smoke. "I am going to give you a red card of my own !" She had me draped over the net with my bottom up in the air. She pulled my little skirt out of the way and yanked my frilly tennis knickers into my rear valley. I was virtually bare bottom in front of the whole team and a few more courts. She took one of my shoes and walloped my bum. I pedaled with each strokes. I couldn't see how crimson she was tanning my bottom, but I could feel how she scorched it. She obviously had plenty of experience, and had me bawling as a well punished school girl. When she decided that I had enough she pulled me up from the net, and both my hands flew under my short skirt to rub my incandescent derriere. 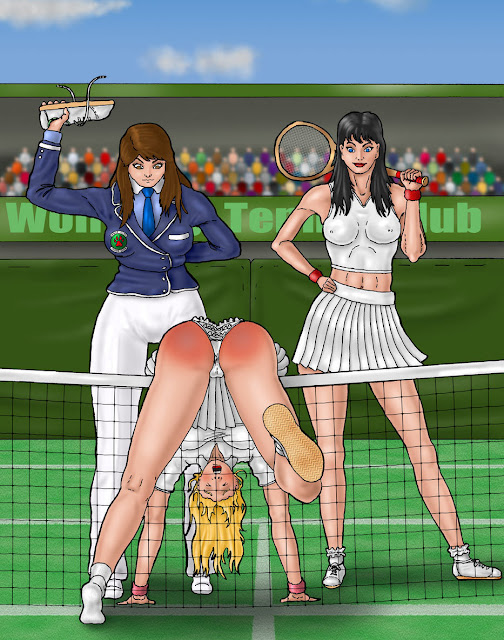 "For the games, next week, you will wear the red knickers I'll be giving you later....even if your butt has mostly recovered its natural color everyone will know that you have been a naughty girl..." She also allowed me to rematch. I was well motivated by my throbbing bum. I gave her a few of my best cannonballs, I had put my back into them ! I eliminated Miss Sidelines in two sets.

Later in the locker room after shower, Nancy teased, "There's a pair of crocodiles eating your moons !"

"She printed the Lacoste logo of your shoes on your butt !"

I was sure that she was teasing, but I looked. "I don't see any crocs, but I feel long sharp teeth eating it, grgrgrgr!

Next day at the bank I was again squirming in my seat... 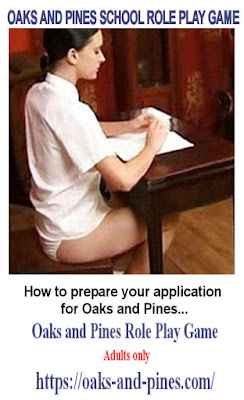